Which Will Be Dominant: Augmented Reality (AR) or Virtual Reality (VR)? I had an oportunity to try out humanity's current best attempt at building the Holodeck from Star Trek... it was everything I hoped it would be. Read More › Apple is playing chicken with the FBI over their right to build software and hardware that securely protects user data... Read More ›

Science is not a Body of Knowledge A brief story from my youth that taught me a lesson about science... Read More ›

Revenge of the Bots: Poker & AI

A look at trends in poker AI, and predictions on impact over the next decade… Read More ›

Your password sucks, but every character counts… Read More ›

Heartbleed Shows a Need for Oversight A great video interview with Bruce Scheier on the NSA and privacy. Read More ›

"Bionic Eye" Coming to the U.S.

Imagine a cochlear implant, but for the visually impaired… Read More ›

I liked Ender’s Game, but it’s a 5-star book compressed into a 3.5 star movie… Read More ›

How to get 1-star App Reviews I strongly recommend 1Password, but don’t use one feature… Read More ›

Half of Jobs Could be Automated?

While “half” is probably hyperbole, the issue is a real one… Read More › 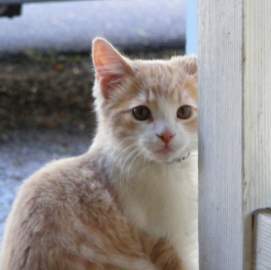 This is an advertisment with a crazy cat! More cats, please!